How long can the longest bridge in the world be? A few kilometers, maybe. Surely not more than 10-20 miles. According to the Guinness Book of World Records, a bridge in China holds that crown. How long you may ask? 164.8 kilometers long. That is approximately 101 miles long. Almost a hundred times longer than the Golden Gate Bridge in San Francisco.

Humans have been building bridges since the late Bronze Age. These were simple tree trunks placed across a chasm to close short distances. The concept of bridges still remains the same. However, the scope of today’s mega constructions is simply mind-boggling.

What really gets you thinking is when you give a thought to what the future holds? If today’s longest bridge is a colossal undertaking when compared to the aforementioned Golden Gate Bridge which was constructed about 90 years ago, then what can we expect 90 years in the future.

Kilotons of Steel and mortar and concrete are used to build these megastructures. And with no dearth of construction materials or funding, the world’s smartest engineering minds keep bridging gaps that only a few decades ago was a bridge too far. Forgive the pun.

Check out the top 10 World’s longest bridges listed below for the pure amazement of what engineering marvels we are capable of as a species. Some of the distances bridged and the stories behind these bridges will surprise you. 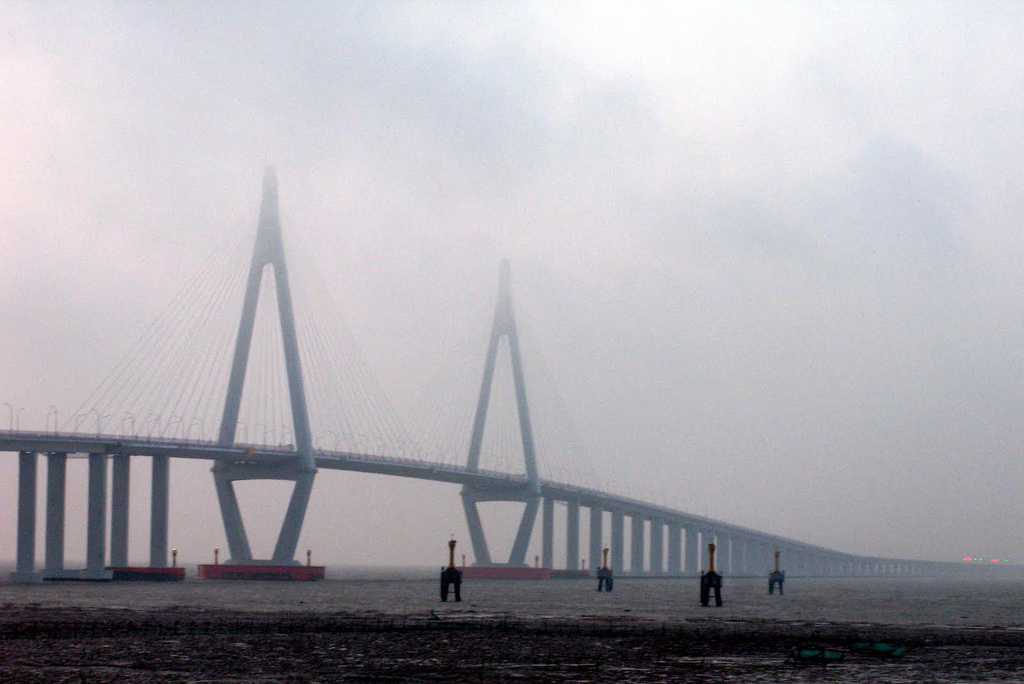 China is a hub of some extra-ordinary construction projects. The most populous country clearly knows how to showcase its economic, technical and labor prowess.

Situated smack in the middle of a typhoon-prone area in the East China Sea, the bridge was designed to weather a storm – quite literally! It took 5 years of planning by over 700 experts and 4 years of construction time to make this architectural marvel a reality. The Bridge was inaugurated on 26th June 2007. 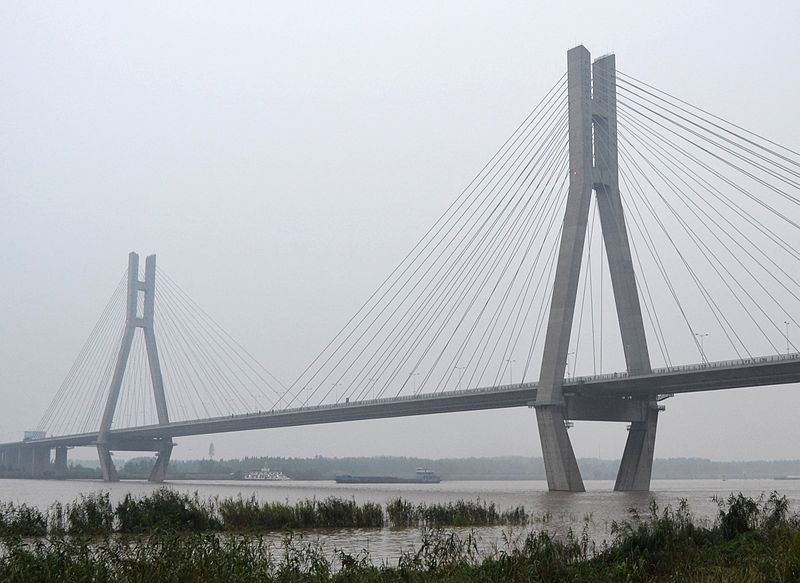 The Yangcun Bridge is Rail Bridge specifically made for China’s high-speed railway network. As such the bridge was constructed keeping in mind that it has to withstand the pressure and force exerted by trains traveling at speeds of over 300 kilometers per hour. Train Safety was the primary concern on the designers’ mind.

The Yangcun High-Speed Rail Bridge is part of the Beijing – Tianjin Interstate Railway. According to regulations imposed by the Chinese railway, no train moving at speeds lower than 350 km/h are allowed on this bridge. Now that is some lofty speed limit!

If you ever find yourself thundering through this bridge on the Beijing Tianjin network then know that you are traveling on one of the longest railway bridges in the entire world. 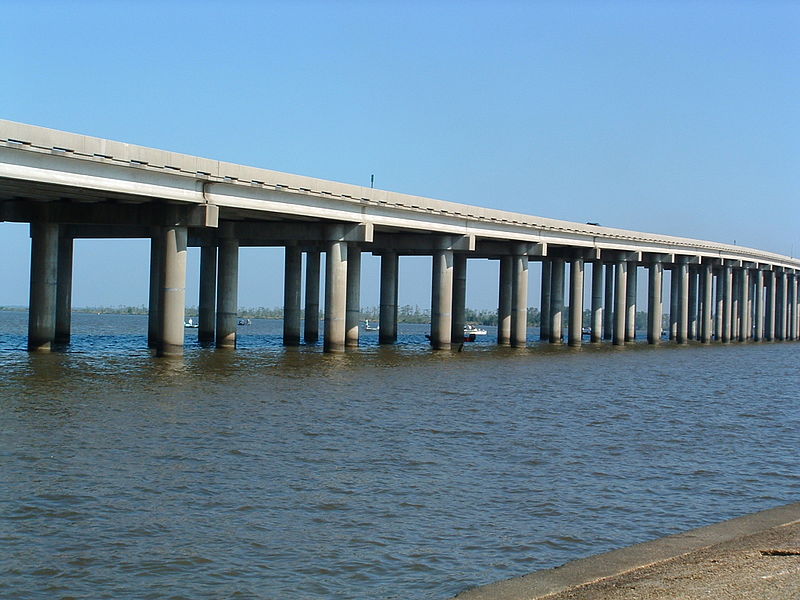 The Manhac Swamp Bridge is a twin concrete trestle bridge situated in Louisiana, U.S.A. The bridge was constructed in the 1979 and is part of the Manhac Swamp Crossing. At the time of construction, this bridge was claimed to be the longest bridge in the world over water.

At 22 miles long, the bridge lays a path over the swamp region of Louisiana. Construction work was made difficult due to the marshy land beneath the bridge. After years of planning and missed deadlines, the bridge was completed at a cost of 7 million dollars per mile.

Today the bridge is both convenient and safe for all who are using the I-55 Interstate highway in the state. The only danger is the alligators lurking in the water below. So stopping for a swim is highly unadvised! 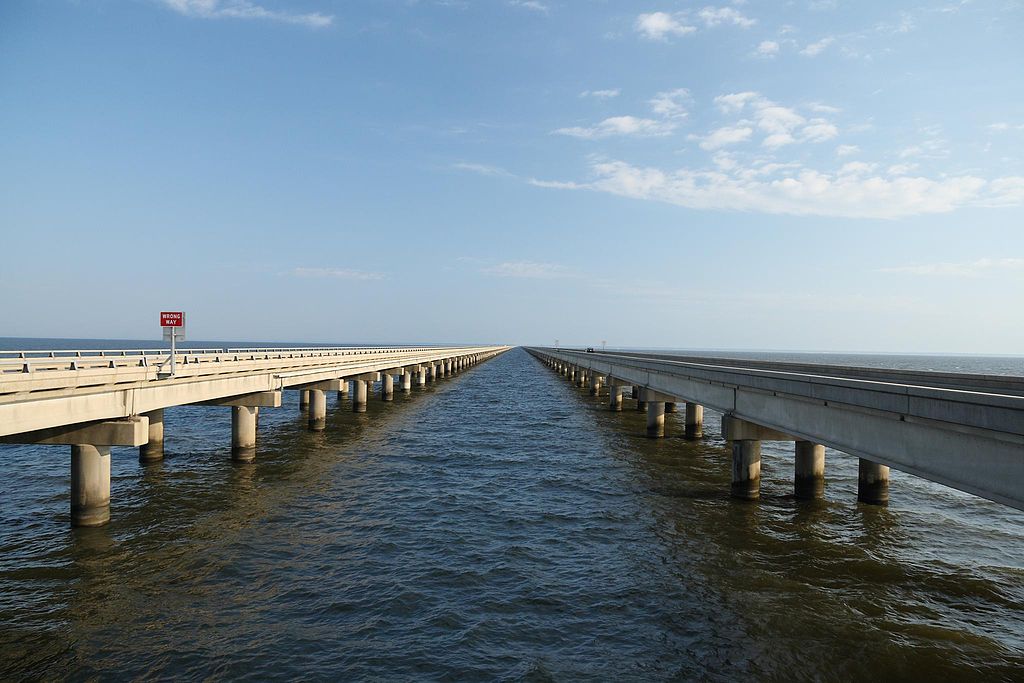 The Causeway, as it is commonly known, connects the towns of Mandeville and Metairie. Lying on either bank of the lake, this north-south bridge is a major part of the I-10 interstate that runs through Louisiana.

The 24-mile long bridge was constructed in 1969. The 4 lane bridge as a unique bascule near the navigation channel that runs beneath the bridge. At the center of the bridge, one is so far away from land on all sides that it almost seems like the bridge is built over the sea.

China has made many contributions to the world of marvelous bridges. Don’t be surprised to find more Chinese bridges on this list. The Beijing Grand Bridge is a rail bridge that connects the Beijing – Shanghai high-speed railway.

The Bridge is 48.11 km long and is part of the aforementioned Beijing high-speed rail project. The bridge took many years of planning and preparation to complete and was finally opened for high-speed rail traffic on the 30th of June 2011. 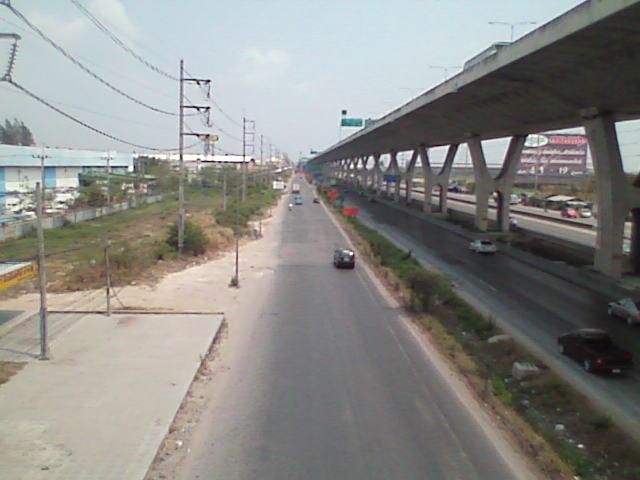 With an investment amount of over a billion dollars, the Bang Na Bridge was designed to be the solution for all of Bangkok’s traffic problems. The construction was undertaken by the Expressway Authority of Thailand and the location chosen gives a panoramic sweep of the Bangkok cityscape.

The bridge which is only accessible by paying a toll was constructed using 1.8 million cubic meters of concrete. The Bang Na Bridge is presently ranked as the 6th longest bridge in the world. It has also become a tourist spot in the city due to the view that it provides. 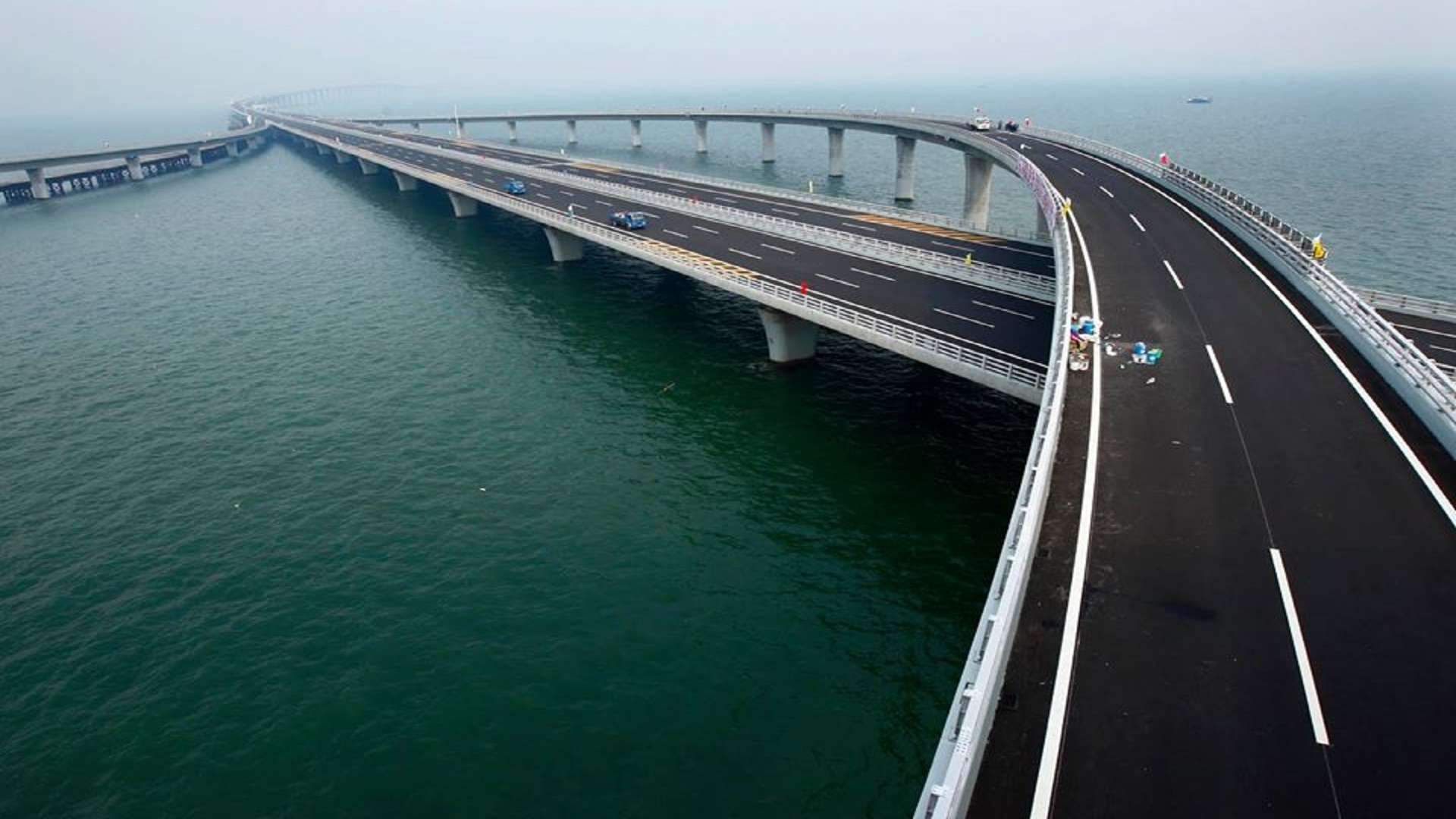 The 79.6 km length of the Weinan Weihe Grand Bridge passes above lesser roads, urban sprawls, rivers, and mountains. As a matter of fact, the bridge passes over the same river twice. The Weinan Weihe Bridge is part of the Zhengzhou–Xi’an High-Speed Railway.

The construction and designs were considered for high-speed train use only. Weinan Weihe Grand Bridge crosses the Wei River twice connecting Zhengzhou and Xi’an. At the time of its construction, the bridge was the longest rail bridge in the world. But after 2010, it was surpassed by 2 other Chinese bridges. 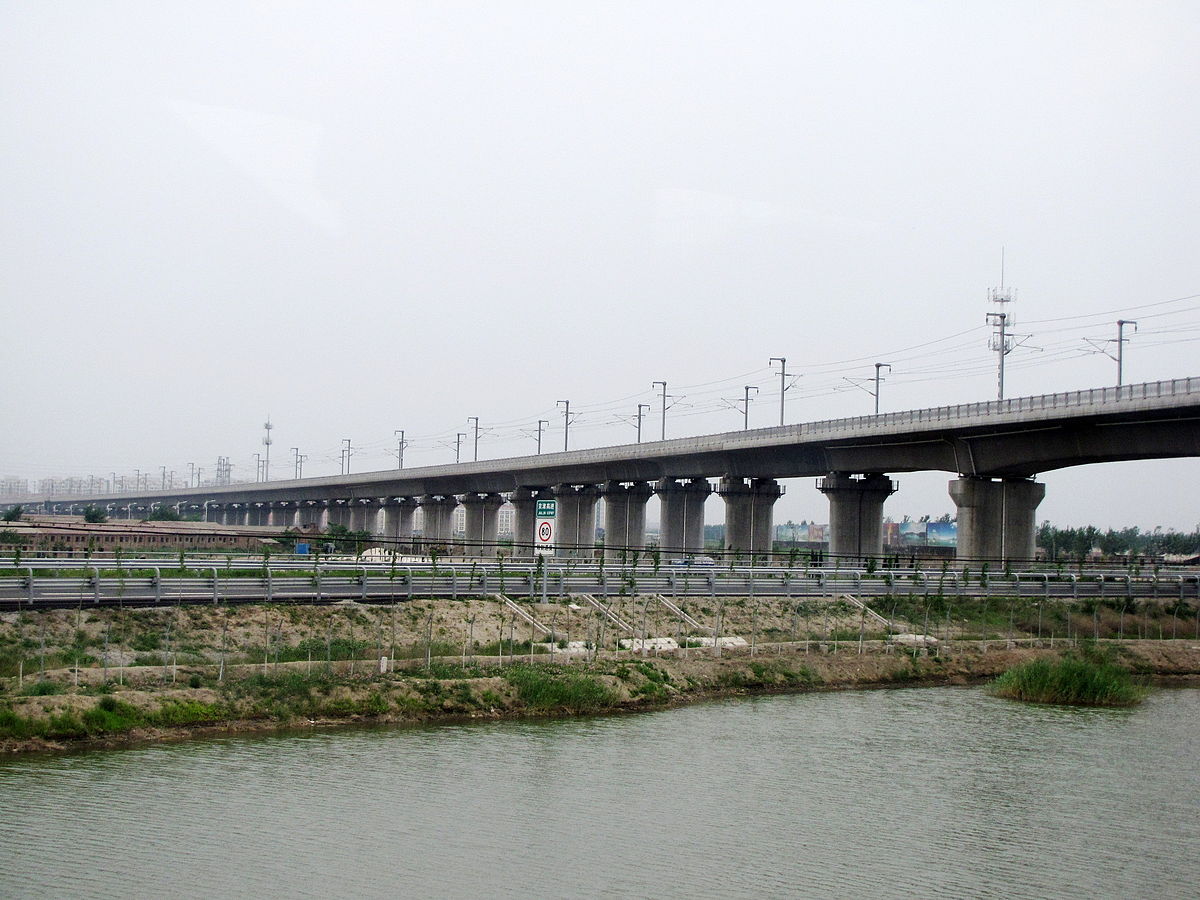 The Tianjin Grand Bridge is presently ranked as the 2nd longest rail bridge in the world by the Guinness Book of World Records. For a bridge that is 113 km long, it was constructed at a relatively reasonable price of 8.5 million dollars. This goes to show the ingenuity of Chinese architects and engineers.

The bridge is again a railway viaduct from Langfang to Qingxian. Architects and engineers had to tackle both political and economic obstacles for completion of Tianjin Grand. It was by no means an easy feat to construct this bridge but the end product was definitely worth the effort. 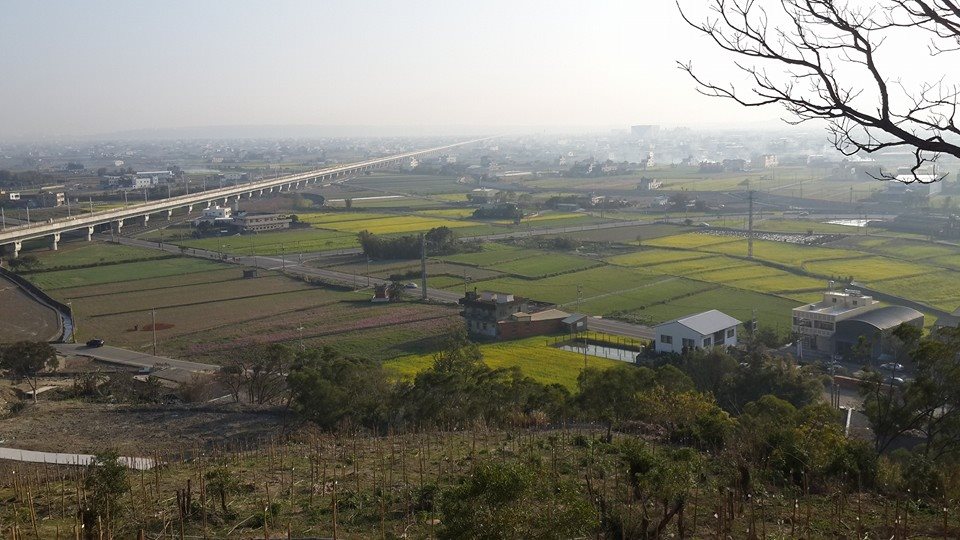 Since the bridge is built over a high seismic activity zone, special care was taken to make the bridge prepared to weather earthquakes in the area. There is an extensive network of viaducts that provide trains with secure locations to halt in case of an emergency. 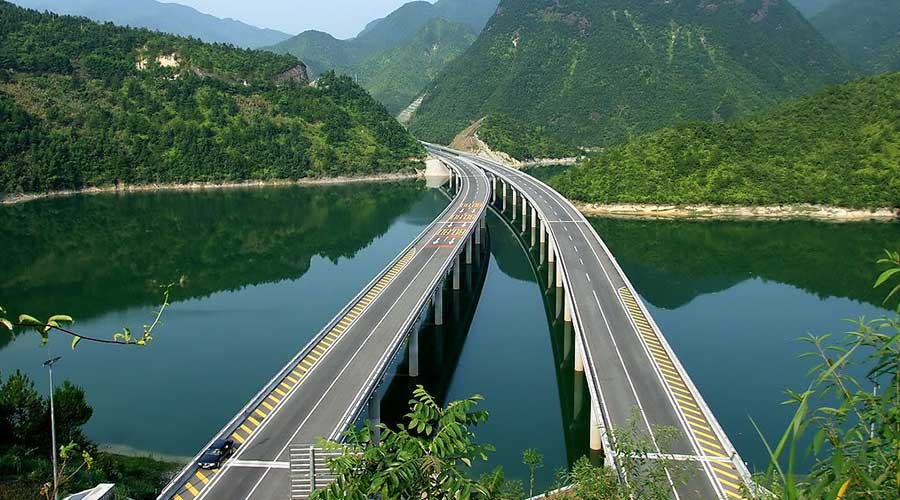 4 years of construction, $8.5 billion dollars and 10,000 laborers all together made the Danyang-Kunshan Grand Bridge possible. 4,50,000 tons of steel with 2000 pillars and a ridiculous amount of steel cables were used for the construction for what is undisputedly the longest bridge constructed in the history of humanity.

Danyang-Kunshan crosses canals, rivers, chasms, streams, flatlands, hills, lakes and rice paddies. A specific portion covers the Yangcheng Lake. The bridge also offers a scenic journey for all who travel along it.

The title for the longest bridge was given by Guinness Book of World Record in June 2011. Since then there is has been no competitor for the crown.

As construction projects get more and more ambitious with each passing year, the sky is the limit for such mega constructions. Buildings, bridges, ports, dams all keep on getting bigger and better as the golden age for engineering and construction moves on. What do you think the next great project will be? A space elevator? Underwater bridges that cross oceans? No one really knows what the future holds! 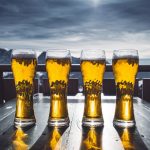 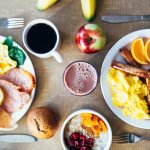